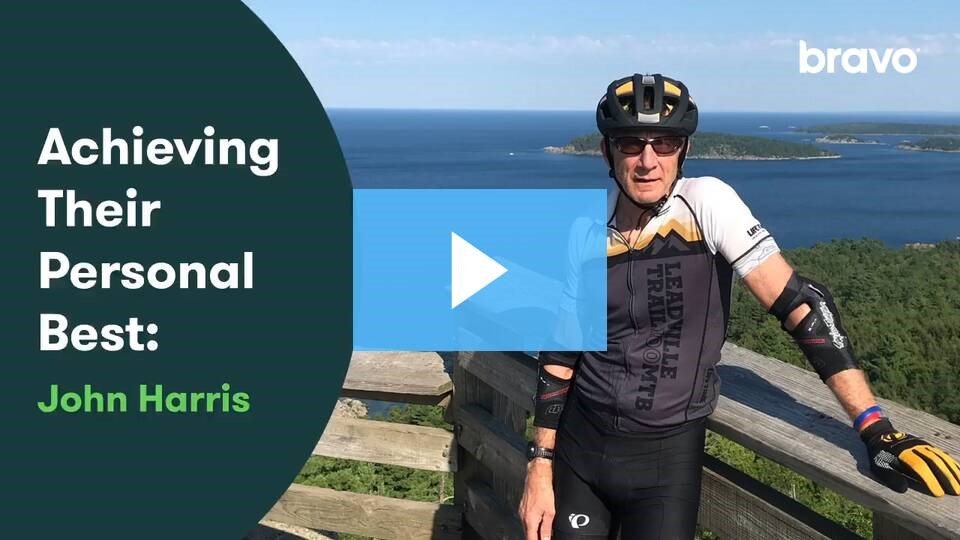 The Power of Resiliency: A “Personal Best” Interview

For this quarter’s newsletter, we caught up with John Harris, a competitive mountain bike enthusiast, former Bravo board member and 40-year wellness industry veteran.

About five years ago, John suffered a serious mountain biking accident that landed him in the hospital for eight days, four of which were spent in the ICU. The injuries could have sidelined him for good.

This summer, John shared on Facebook his completion of the virtual Leadville 100,000 Feet Elevation Gain Challenge, and we wanted to congratulate him on achieving his personal best, especially after a life-threatening injury like his.

Read on (or watch the 28-minute interview below) for John’s inspiring story of perseverance and triumph, on building up physical and mental resilience, and how taking care of yourself physically and emotionally can lead to better outcomes when faced with challenges like an injury or illness.

John is an experienced mountain biker. He loved riding his bike as a kid and dabbled here and there with road and mountain biking throughout his twenties and thirties but was never very serious about it.

The linchpin for him was a trip out to Moab, Utah, one of the “meccas of mountain biking” for a four-day adventure, and he never looked back. Now he participates in 11-12 races every year.

Several years ago, John was on a relatively routine ride in an area he’d ridden frequently. Whether he was on autopilot or unseen debris led to his crash, his bike kicked out sideways on a difficult descent with a series of sweeping “S” curves. He flipped and landed on the upper right side of his back. John remembered, “I hit hard, and I felt this explosion of heat and electricity through my upper back.”

As he unclipped his feet from the bike and caught his breath, he realized his right arm was incapacitated. He called his wife and told her it was a run of the mill injury, coordinated a pickup with his niece who, luckily, was about 20 minutes away, and hiked out of the woods to meet her.

As he walked, his helmet straps seemed to get tighter and tighter as swelling commenced, and his breaths became shallow. He typed 911 into his phone just in case he needed to make the call on the way to his rendezvous point. When he got there, he and his niece decided to call 911 for an ambulance to take him to the hospital.

After a CT scan, doctors discovered the fall had caused six of his ribs to break and puncture his lung, a shattered scapula, a third-degree AC separation of the shoulder, and a huge laceration on his tongue. Not really a “run of the mill” injury.

He was in a medically-induced coma for two of the four days in the ICU and then was moved to the regular hospital to start the recovery process. He said, “It was pretty extensive injuries, certainly life-threatening injuries, but fortunately, I had the strength and resilience to save myself and then take it from there.”

His resilience, built over many years of taking care of himself physically and emotionally, allowed him to view the accident and injuries as a setback rather than something that would sideline him for good. In his words, “I just had to get past it and move on.”

The Leadville 100 is one of the most well-known mountain bike races on earth and revered as one of the most difficult—one hundred miles across the high-altitude, extreme terrain of the Colorado Rockies.

A friend of John’s who completed the Leadville 100 in the past saw that the competition was taking place a year to the day after his crash and suggested John enter the race as a sort of “coming out party” and proof of his full recovery.

He decided to participate in the race but missed the cut at 73 miles by two minutes after three flat tires and a damaged rear derailleur. John felt demoralized after all the work that he put in to get there. “You take an entire team out to support you…It’s an enormous undertaking,” he said. “I couldn’t let it lie.”

Two years after the accident, John earned a finisher medal by completing the Leadville 100 in under 13 hours. He’d almost made his peace with the finisher medal but felt a nagging lack of closure. “I should’ve been happy. I should’ve said, ‘Alright, finisher medal, that’s what I was shooting for.’ But I always had this little lack of closure. Could I make 12 hours and get the famed belt buckle that finishers under 12 hours receive?” he questioned. “And yet, it just wasn’t practical from a life perspective.”

As a competitive racer, John wanted closure with the Leadville 100 (and the buckle). But earning the belt buckle would’ve required some pretty big sacrifices—more than 25 hours per week on the bike, months of altitude training out in Colorado and more. 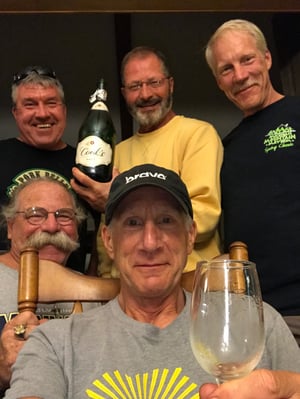 Enter COVID-19. The organizers of the Leadville 100 canceled this year’s race and instead offered a challenge:

Any rider who could climb 100,000 feet in elevation against their feet above sea level starting point between June 20 and August 15 would earn a famed Leadville 100 belt buckle, typically only presented to racers who finish the actual race in under 12 hours.

John welcomed the distraction and opportunity for closure with the race and decided to compete. He climbed nearly 103,000 feet, riding over 1,300 miles, and finished with three days to spare.

In the same way John knew he could recover fully from his injuries, he has taken on the same mindset about COVID-19. He knows that being in good physical health provided the resiliency and “reserves” his body and mind needed to recover.

John commented that while he’s taking the recommended precautions to prevent contraction of the virus, he isn’t living in fear of the virus. “The statistics are in my favor,” he said. “The fact I’ve been healthy and fit, even though I’m 66 years old, puts me in a pretty low-risk group.” 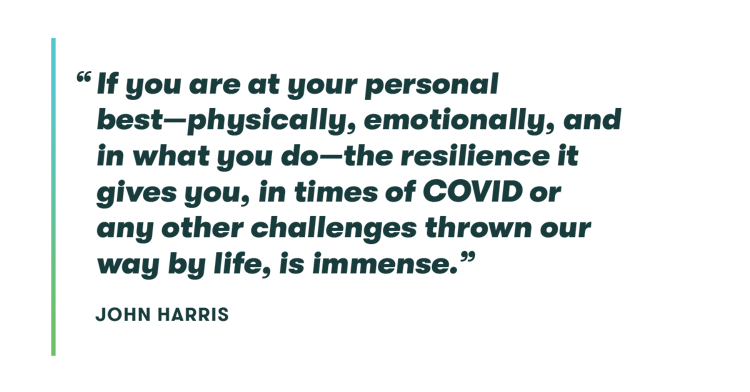 We discussed further how being in good physical health can actually reduce your health age, which isn’t the same as your chronological age.

While age is a known risk factor for COVID-19, a lower health age (even at a higher chronological age) and lack of existing conditions as long as the person is not otherwise immunocompromised could suggest a lower risk score.

If that’s true or even possible, why is it so difficult to convince people that prioritizing your physical and emotional health is preventative when it comes to illness and injury?

He said in response, “In the wellness field for years, we’ve encouraged people to take care of themselves and often people have not really listened. And yet we’ve got this pandemic and people are in fact changing their behaviors, wearing masks and doing all the right things. So why the difference? My view is that it is classic behavioral economics, where people fear the things they think can kill them in the near future, and they don’t fear the things that can get them over time. And yet it’s the things that can kill us quickly that can be overcome by the actions we take over time to stay healthy and fit.”

For more on this perspective and the importance of the adoption and funding of health promotion programs, and the culture shift in our families, communities and workplaces to prioritize wellness over sick care, check out the article featuring another interview with John in Forbes by Colleen Reilly called “An Unprecedented Attack on Society’s Core.”